Home>FAQ >My doctor and friends say that I don’t need to do anything, the head will become symmetrical anyway. Is that true? 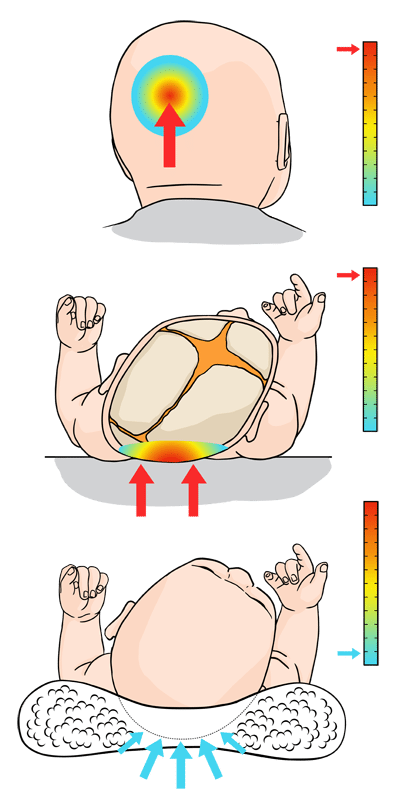 My doctor and friends say that I don’t need to do anything, the head will become symmetrical anyway. Is that true?

If you noticed the positional deformity in the first three or four months of your child’s life and you reacted early enough going to a specialist and eliminating the pressure causing the head flattening, there is a big chance that the head’s shape will improve. HeadCare™ pillow has been designed to reduce the pressure of the surface on newborn babies’ and infants’ heads while sleeping.

If the deformities are discovered late and no action is taken, there is a great risk that after the child is six months old you will be unable to correct the head’s shape, which may result in visible asymmetry of facial skeleton.The later you discover the deformities, the longer and less likely is the comeback to the natural shape of the head.

Remember! Early preventive actions (e.g. using HeadCare™ pillow), especially before the child is six months old, can successfully reduce the skull deformity and ensure that your child’s head is symmetrical and well-proportioned. 85% of the skull grows in the first year of the child’s life! Within the first three months, the head circumference grows by ca.2 cm/month. Between the 4th and 6th month, it increases by 1 cm/month.After the 6th month, the growth rate goes down to 0.5 cm/month (Guo, Roche, Moore, 1988).

According to American research (test conducted on 102 healthy infants – Stellwagen et al., 2008), most infants show mild or moderate asymmetry of facial skeleton and one out of six infants has torticollis. The researchers also suggested that many newborn babies are simply undiagnosed. One of the main reasons of that situation is the fact that parents consult a specialist only with severe cases and specialists sometimes ignore such deformities. Hence, it is worth using HeadCare™ pillow as a precaution from the first days of the child’s life.

Newborn babies’ heads are very soft to enable the relatively big head to pass through the birth canal. The correct shape of the infant’s head is formed 6-8 weeks after its birth. If the infant’s head is still deformed after that time, it may mean that the child has some form of plagiocephaly. In such case, it is recommended to join several methods which can help diminish the pressure on the given part of the head.We recommend using HeadCare™ pillow for sleeping. When playing, the child should spend as much time as possible in the prone position.To get a correct diagnosis, you should consult an experienced specialist who will rule out serious diseases such as craniosynostosis.

This website uses cookies to improve your experience while you navigate through the website. Out of these, the cookies that are categorized as necessary are stored on your browser as they are essential for the working of basic functionalities of the website. We also use third-party cookies that help us analyze and understand how you use this website. These cookies will be stored in your browser only with your consent. You also have the option to opt-out of these cookies. But opting out of some of these cookies may affect your browsing experience.
Necessary Always Enabled

Any cookies that may not be particularly necessary for the website to function and is used specifically to collect user personal data via analytics, ads, other embedded contents are termed as non-necessary cookies. It is mandatory to procure user consent prior to running these cookies on your website.